skip to main | skip to sidebar

Mephistopheles ● In Frustration I Hear Singing 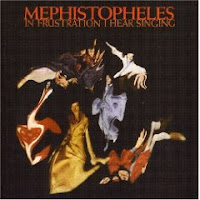 Can you believe there was once a band called Mephistopheles? Of course you can. It’s 1969 and you’re visiting The “I-Own-Every-Record-You’d-Never-Buy” CD Consumer’s Guide. Taking its name from 16th century Faustian legend—Mephistopheles was the devil to whom Faust sold his soul—this six-piece outfit emerged from the psychedelic underground and recorded one album, the strangely titled In Frustration I Hear Singing. This 12-song lp, lost and found from the vaults of Reprise Records, is prototypical late ‘60s psychedelia, a musical exercise in odd song titles (“The Cricket Song,” “The Girl Who Self-Destroyed”), bizarre lyrical content (“Listen to the crickets/listen everyday/listen to the crickets/tell me what they say”) and awkward rock instrumentation (“Do Not Expect a Garden” features a trumpet; “Vagabond Queen” is saddled with a flute). Despite the hippie-ness of it all, Mephistopheles features an expert ensemble of skilled musicians with a strong sense of melody. The guitar work, especially on songs like “Dead Ringer” and the title track, is particularly impressive. It’s the vocals, however, that very nearly turn this record into rock and roll roadkill (God bless the tortured soul singing “Sleeping Deeply”). Legend has it that three of the band’s members became Jehovah’s Witnesses, which ultimately led to the group’s demise. I’m not sure how true that is, but of this I’m certain: Guitarist Fred Tackett has been a member of Little Feat since 1988.
Posted by KWM at 9:14 AM

This project is the result of hearing the Eagles' "Hotel California" one too many times. Or maybe it was "Evil Ways" or "Black Magic Woman" by Santana. Or anything by the Steve Miller Band. The "I-Own-Every-Record-You'd-Never-Buy" CD Consumer's Guide is the ongoing search to locate what you don't hear on classic rock radio. Some of what you'll find here is great. Some of it is downright awful. All of it sits on my shelf, an ever-expanding collection of the most obscure rarities of the 1970s. Welcome to my nightmare.

"Armed with a serious set of musical chops..."

In the Realm of Asgærd

"... worthy of its emphatic punctuation mark"

Morly Grey ● The Only Truth

"... an album full of great surprises"

"... one of the more creative efforts from the decade’s art-rock archives"

"... admired for both its obscure collectable status and its psychedelic heaviness"

"... the playing is tight and the songwriting impressive"